Welcome to the website of the Multimodal Imaging and Connectome Analysis (MICA) Lab. We are situated at the McConnell Brain Imaging Centre of the Montreal Neurological Institute.

Our research seeks to understand the role of structural and functional brain network organization in integrative and higher-order cognition in healthy and diseased populations, notably people with epilepsy and autism. We develop neuroinformatics and statistical learning approaches that integrate neuroimaging and quantitative histological techniques with large-scale network models and comprehensive behavioral assays. Our multi-scale research rests on three complementary themes that address the interplay of structural wiring, functional interactions, and cognition in healthy and diseased brains. 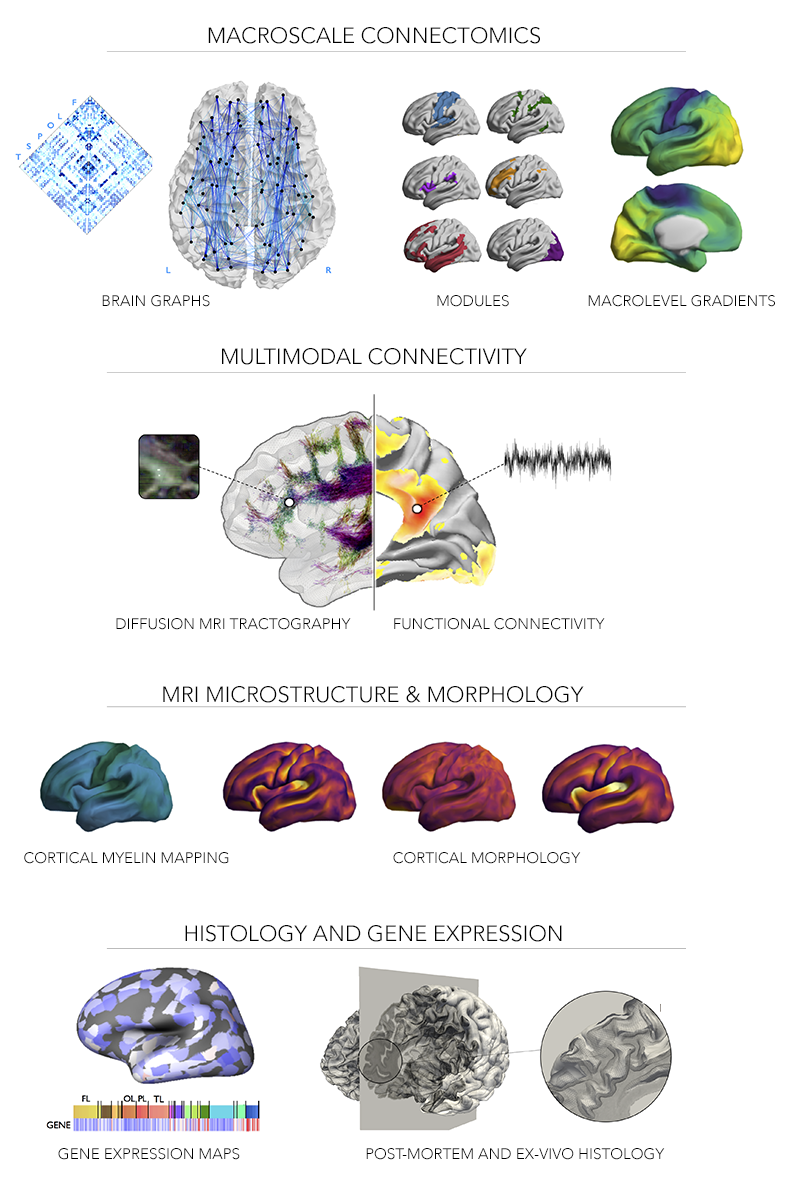 THEME 1: TOWARDS MULTI-SCALE CARTOGRAPHIES OF THE HUMAN BRAIN

In recent years, neuroimaging studies focusing on higher-order cognitive systems have increasingly shifted from the regional mapping of activations during specific tasks towards investigations of connectivity. Such techniques help to identify individual brain regions as being characterized by unique connectivity patterns and to study network-level communication patterns. Our team studies such patterns of integration and segregation in large-scale networks, and assesses how principles of cortical hierarchical organization contribute to cognitive functions that involve escaping the constraints of the immediate external world, and which may have adaptive value in navigating or anticipating complex social environments. To address these goals, we recently developed a several novel approaches to integrate microstructural measures (derived from either histological techniques or myelin-sensitive MRI) with task-related functional MRI, macroscale connectomics, as well as meta-analytical and gene expression data for multiscale neuroscientific discovery science. We have also developed open access software to study spatial trends of brain structure and function, also known as gradients of brain organization. Our lab is also closely integrated with the Helmholtz International BigBrain Analytics and Learning Laboratory (Hiball), and several trainees in the lab integrate histological and molecular techniques with multimodal imaging and AI in their day-to-day projects. 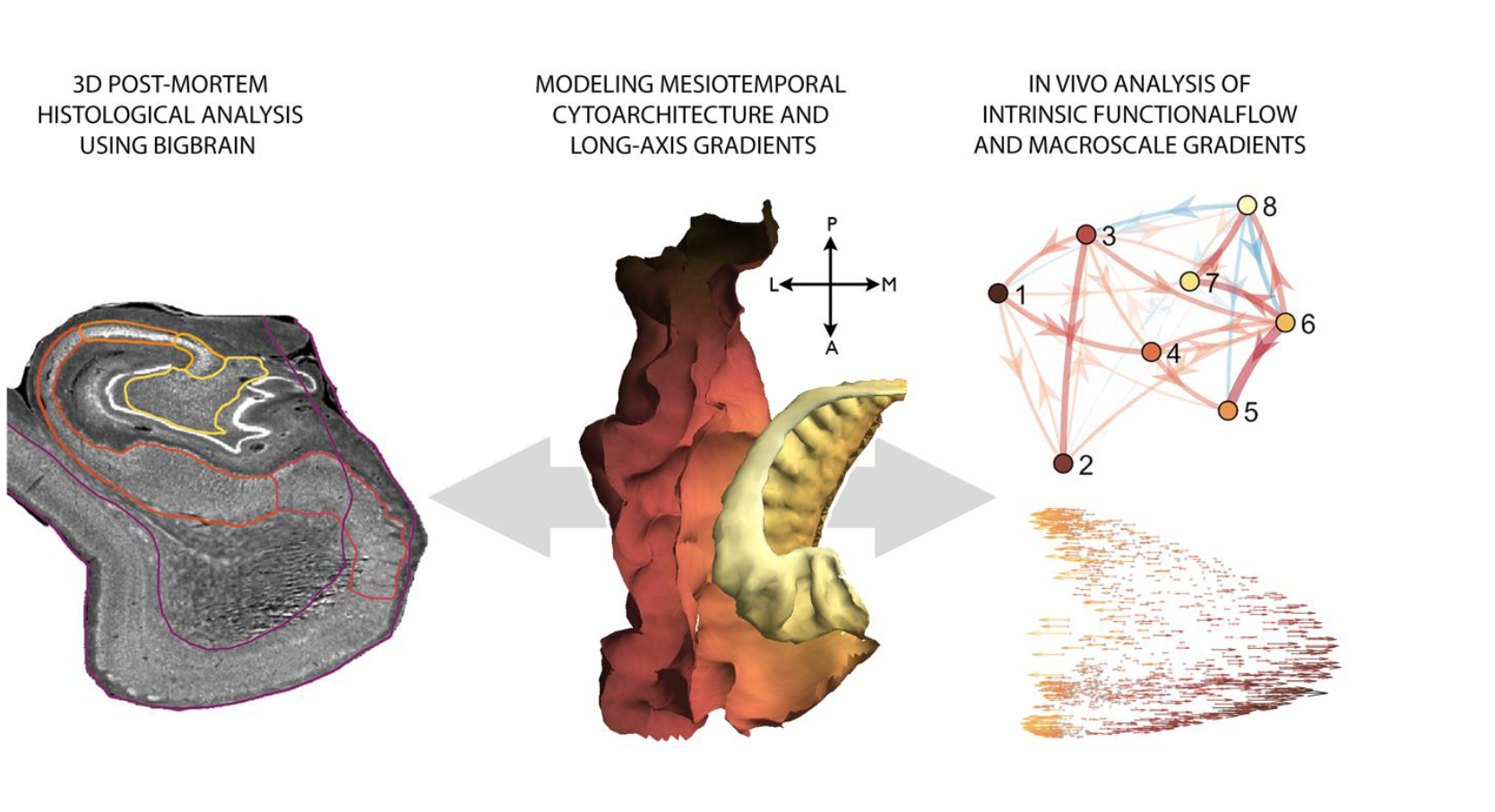 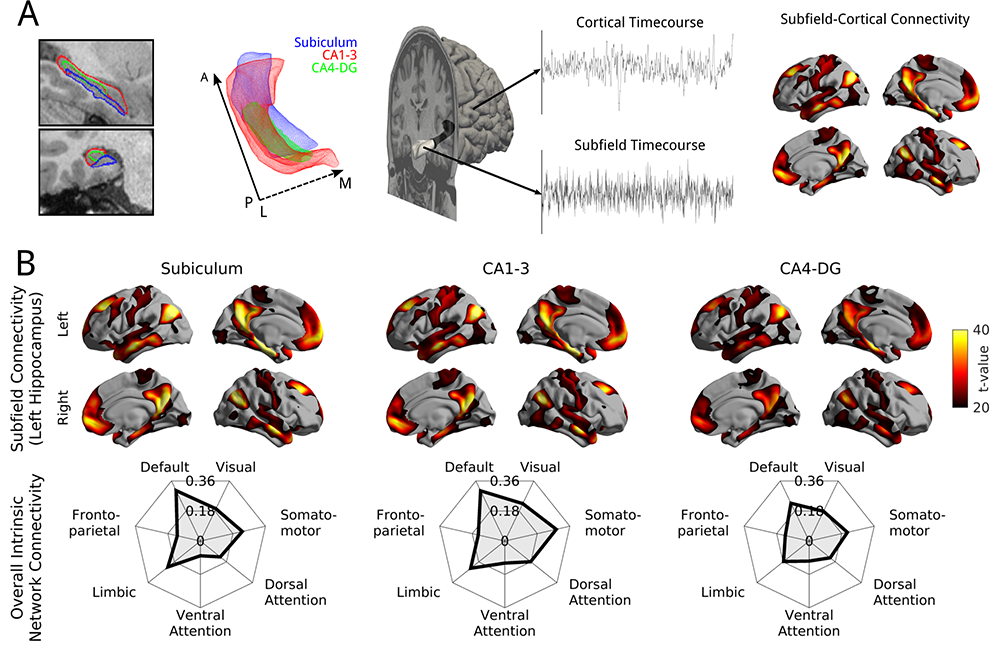 Higher-order brain networks have been shown to be preferentially susceptible to a broad range of neurodevelopmental and neurodegenerative conditions. Drug-resistant epilepsy, a severe disorder affecting millions of people world wide, often incorporates both a neurodevelopmental etiology and a progressive trajectory resembling established neurodegenerative conditions. Notably, many patients present with structural anomalies in higher-order areas, allowing for investigations on the causal role of these regions in cognition. Patients with drug-resistant epilepsy indeed not only present with seizures, but often with impairments across multiple cognitive domains. These disturbances severely impact patients’ daily lives, and are often described as more detrimental to patient wellbeing than the seizures themselves. Moreover, while surgery targeting the structural lesion is the most effective treatment to control the seizures and often also results in beneficial cognitive side effects, a subgroup of patients may experience postoperative cognitive and affective difficulties. To examine the contribution of different brain regions to higher-order network organization and cognitive functions, we build multivariate and mediation analyses designed to link microstructural descriptors of pathology (derived from high-resolution MRI and histology) with structural and functional connectomics, as well as task-based measures of cognitive and affective dysfunction. Longitudinal designs assess the progressive impact of the disorder, and its modulation by clinical factors. Additionally, we build computational approaches that leverage multimodal imaging and AI technology to improve the prediction of clinical and cognitive outcomes following epilepsy surgery, with the goal of making recommendations for improved interventions. 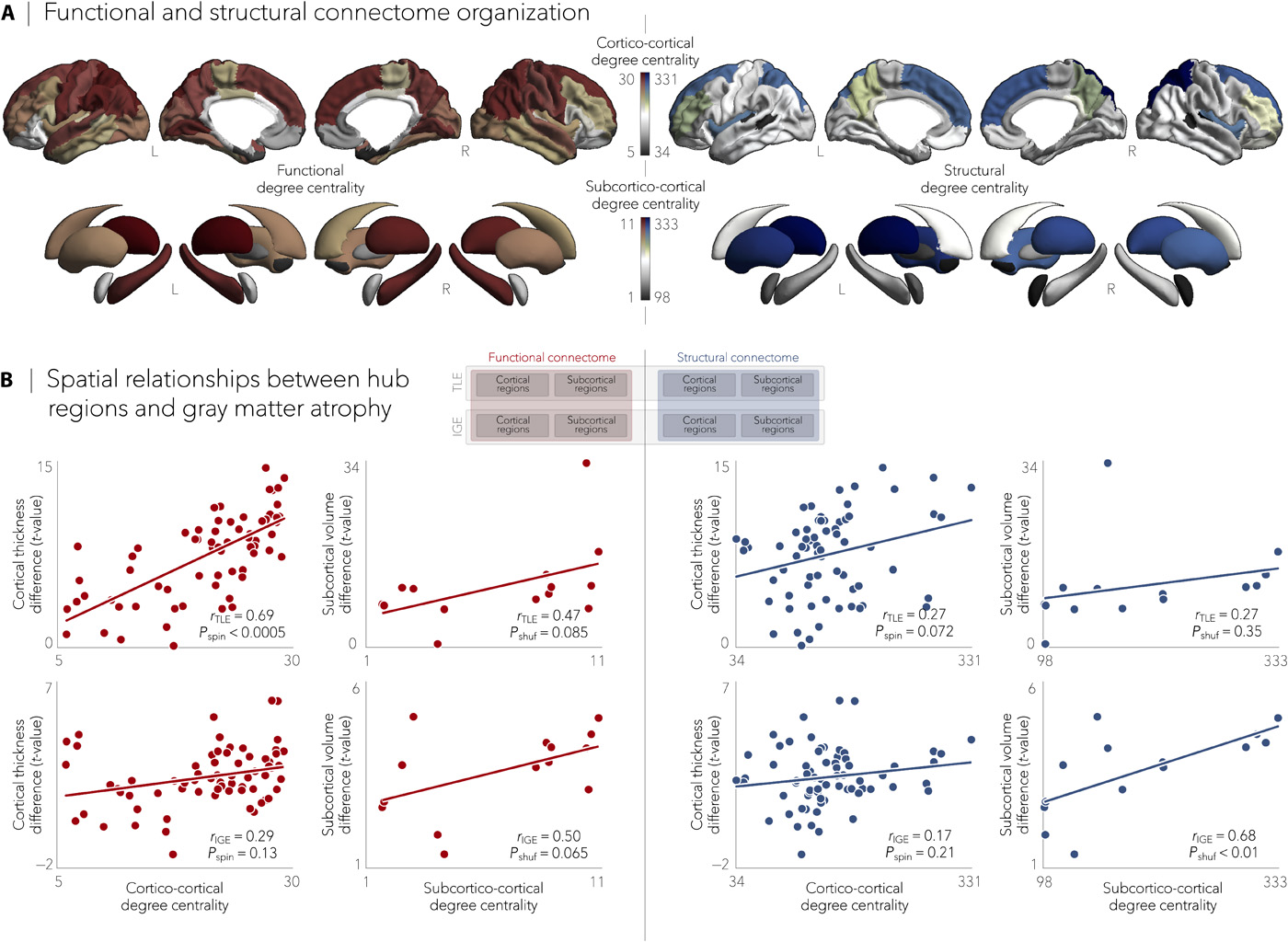 This theme evaluates structure-function interactions in the first two decades of life - a period of profound changes in brain structure, functional network organization, as well as cognitive and socio-affective competences. Furthermore, numerous mental illnesses are increasingly conceptualized through a neurodevelopmental perspective, supported by 75% of these beginning prior to the age 24 and 50% prior to age 14. Studying typical neurodevelopment and neurodevelopmental disorders, thus, promises mechanistic insights into structural and functional factors during the maturation of higher-order cognitive and socio-affective networks. In addition to assessing interactions between microstructural maturation and changes in network organization and hierarchy in typically developing cohorts, the team will assess imbalanced structure-function coordination in neurodevelopmental disorders, including individuals with autism and children with epilepsy (in collaboration with Dewi Schrader at UBC Vancouver). In particular, multi-scale imaging studies in children with drug-resistant epilepsy will provide a developmental perspective on the effect of brain lesions on higher-order network formation, and expand the scope of the predictive platform developed in Theme 2. 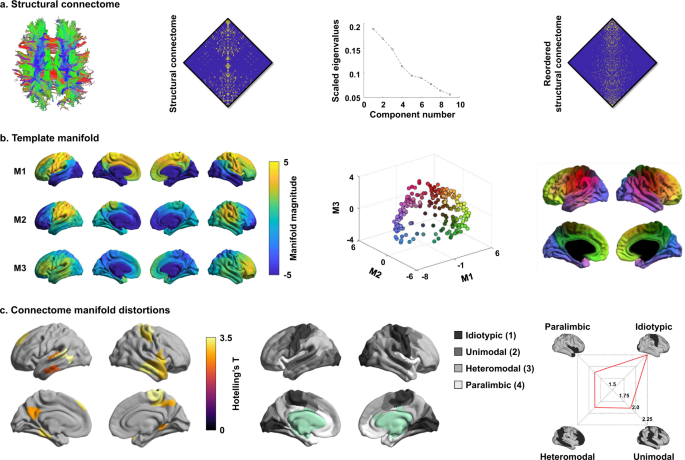 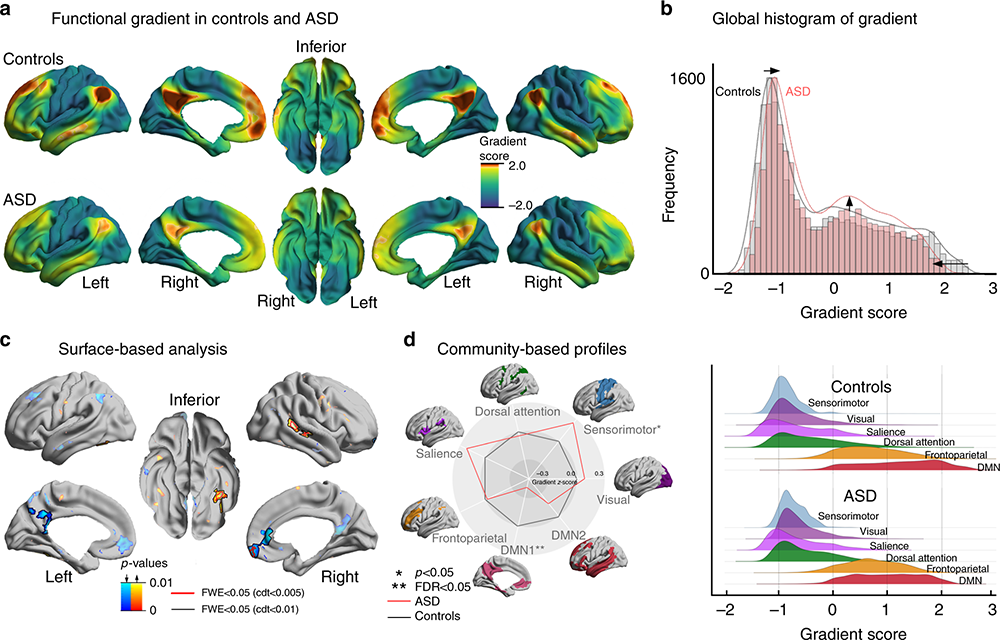 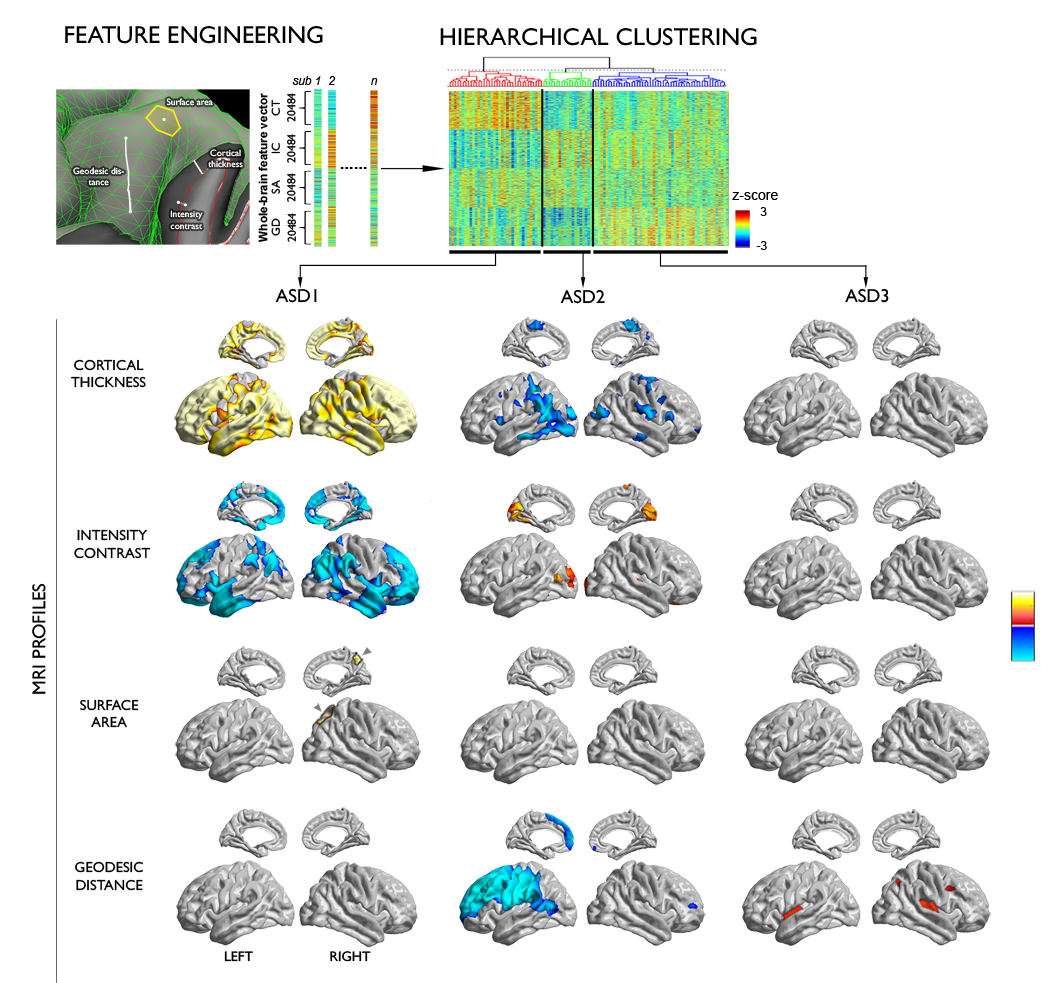 Our publications on google scholar

Our open software on Github

Slides for our presentations and talks

Connect with our collaborators:

Connect with our institute:

We are always looking for talented and enthusiastic trainees to join our lab! If you are interested in joining, please email us your CV and a cover letter

NETWORK BASED ATROPHY MODELING IN THE COMMON EPILEPSIES: A WORLDWIDE ENIGMA STUDY

MACROSCALE AND MICROCIRCUIT DISSOCIATION OF FOCAL AND GENERALIZED HUMAN EPILEPSIES

BRAINSPACE: A TOOLBOX FOR THE ANALYSIS OF MACROSCALE GRADIENTS IN NEUROIMAGING AND CONNECTOMICS DATASETS

GRADIENTS OF STRUCTURE-FUNCTION TETHERING ACROSS NEOCORTEX

MICROSTRUCTURAL AND FUNCTIONAL GRADIENTS ARE INCREASINGLY DISSOCATED IN TRANSMODAL CORTICES

NEUROIMAGING AND CONNECTOMICS OF DRUG-RESISTRANT EPILEPSY AT MULTIPLE SCALES: FROM FOCAL LESIONS TO MACROSCALE NETWORKS

TIME IS BRAIN? A META-ANALYSIS ON PROGRESSIVE ATROPHY IN TEMPORAL LOBE EPILEPSY

Below a list of software/tools that we had the opportunity to work on in the last years: 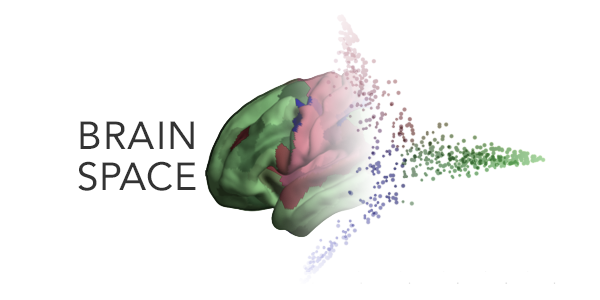 BrainSpace is a lightweight cross-platform toolbox primarily intended for macroscale gradient mapping and analysis of neuroimaging and connectome level data. The current version of BrainSpace is available in Python and MATLAB, programming languages widely used by the neuroimaging and network neuroscience communities. The toolbox also contains several maps that allow for exploratory analysis of gradient correspondence with other brain-derived features, together with tools to generate spatial null models. Please visit the brainspace docu here Get the tools at our labs github.

The ENIGMA TOOLBOX provides a centralized, and continuously updated, repository of meta-analytical case-control comparisons across a wide range of disorders. As many ENIGMA groups have moved beyond meta-analysis towards ‘mega’-analysis of subject-level data, the ENIGMA TOOLBOX also includes an example of subject-level example data from an individual site that have been processed according to ENIGMA protocols. It should be noted, however, that subject-level or raw imaging data are not openly available for dissemination to the scientific community. Interested scientists are encouraged to visit the ENIGMA website to learn more about current projects, joining and contributing to an active Working Group, or proposing a new group. Please visit the enigma-toolbox docu here Get the tools at our labs github. 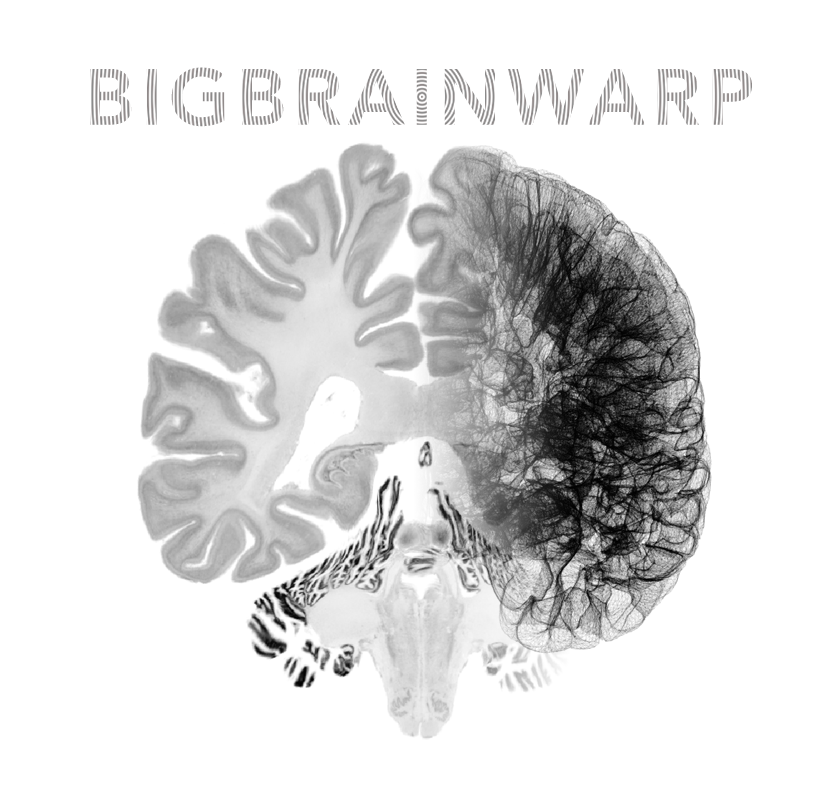 BigBrain is a singular dataset that offers an ultra-high-resolution (20µm) volumetric reconstruction of a sliced and stained post-mortem human brain (Amunts et al. 2013). BigBrainWarp aims to enable integration of BigBrain with neuroimaging and other neurobiological modalities, helping a wide range of neuroscientists to utilise the cytoarchitectural information encoded in BigBrain for multi-scale neuroscientific discovery. Please visit the bigbrainwarp docu here 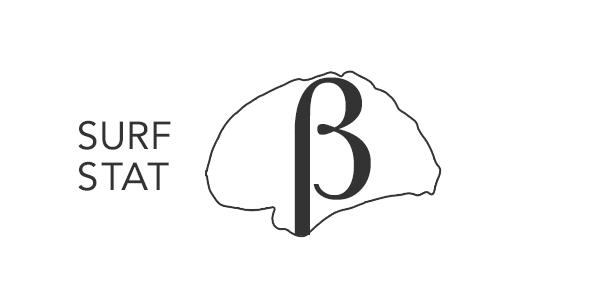 OUR RESEARCH IS KINDLY SUPPORTED BY